My First Encounter with a Rooster 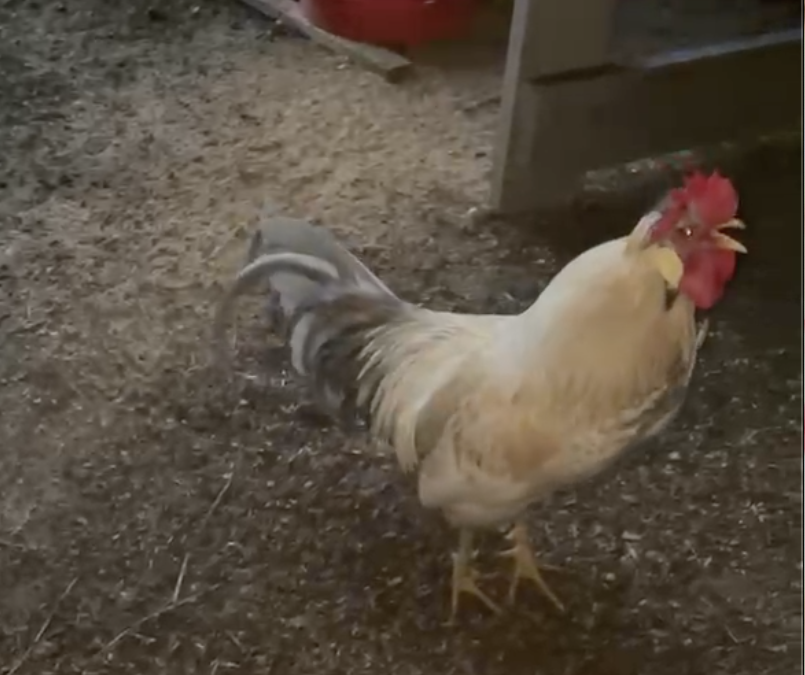 I’d like to preface this story with a reminder that I grew up in the city. I’ve never been around many farm animals, including chickens. So, with this in mind, I’ll tell you about my first encounter with a rooster.

When I went over to my chicken coach’s home to get my rooster and some hens, the men were busy with man things so the ladies went down to the barn to catch the chickens. We entered the coop and there were chickens up in the rafters and on the roost, and a few roosters crowing.

We put our eyes on a hen and began the process of trying to catch her. Do you have any idea how to catch a chicken? Well, I certainly don’t. But apparently, you can grab their feet or, in some cases, their tail feathers.

We had the hen cornered and slowly moved in towards her. OK, “we” is a bit strong. It was my chicken coach; I was not sure what to do. Well, as she approached the hen, the hen flew right toward me and we ended up eye to eye.

We both squealed, and the chicken got away. Eventually we caught her, and my chicken coach held the hen and let me pet her and then  hold her. We put her in the transport kennel and then caught the other hen and our rooster, Oden.

We headed home and put them in the run. I should note that it had started raining pretty hard, as we were in the midst of a Pineapple Express. It was approaching dusk but there was still light. So we left them alone and went to the house. After dark, I headed up to the coop to close the door. To my dismay, Oden and the two new hens were roosting in the lean-to and barely out of the driving rain.

Knowing it would be safer and drier for them in the coop and feeling confident that I could handle a hen after my experience earlier that day, I put my hands around the body of the hen closest to me.

Without a hesitation, Oden leaned over and pecked me hard on the hand. His point was clear: leave her alone, she is mine!

I retreated, went back to the house and shared the story with my husband. Later that evening, I went back to the chicken run. They were still roosting in the lean-to and it was still raining. I was very concerned about their safety, but with the temperature about 50 degrees, I figured they would be OK for one night.

The next morning, with the light of day, Oden was able to clearly see his surroundings and immediately took charge of the coop, placing himself at the top of the nine-chicken pecking order.

What I appreciated about my exchange with Oden was that he assumed responsibility for his hens and let me know it.

How many times have you seen leaders say they are in charge but when difficult decisions need to be made, they don’t make or own them? If you want your team members to achieve their full potential, they need a leader they know is looking out for them.

Helping a team reach its full potential requires more than making difficult decisions. It requires the ability to be clear on where the organization is going and how to get there. Creating a vision with a path toward achieving that vision is key to getting employees aligned behind that vision.

What is the best way to create that vision? Some leaders feel that responsibility lands squarely on their shoulders, but I’d challenge that approach.

Involving the team will provide different perspectives, challenging viewpoints and ultimately greater unity. It has been my experience that the more you can get your leadership team and the rest of your organization to see the vision and the path to achieving that vision, the sooner your organization will  get traction toward achieving that vision.

If you aren’t getting the traction or the results you desire, it may be that the organization isn’t clear on the direction or the path.

If you would like a copy of the tool my clients use to establish their vision, I’m happy to share it with you.

And if you want loyalty from your team, you may be able to learn something from Oden (just ignore his views on crowing all day long)…

P.S.When your team becomes aligned behind your vision and your path towards achieving that vision that where the magic happens.  “Magic” means accelerated growth, higher profits, and more control.  And that is something everyone can get behind.